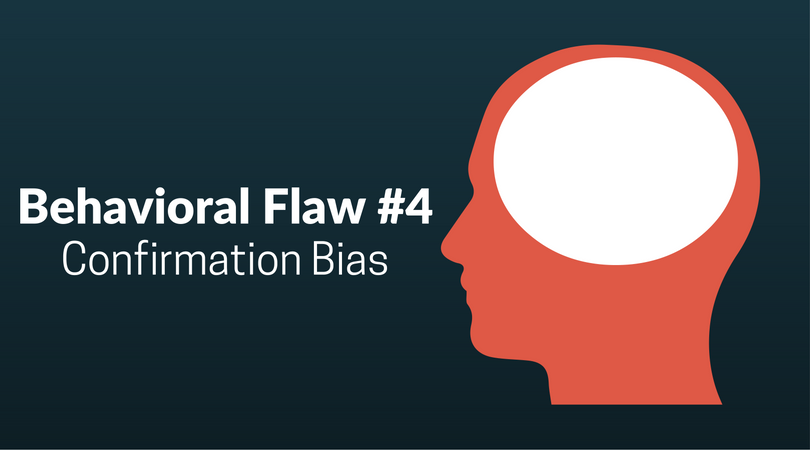 This might be one of the easier behavioural shortcomings to detect. In short, it’s the tendency to seek out things that confirm our beliefs. As Daniel Kahneman puts it in Thinking, Fast and Slow, “people seek data that are likely to be compatible with the beliefs they currently hold.” It’s not too difficult to see examples of this bias. For example, if you think President-elect Trump is an idiot, you’re likely to avoid news stories to the contrary. In fact, along those lines, the site youarenotsosmart.com—which has a superb podcast, as well—cites a 2008 study:

During the 2008 U.S. presidential election, Valdis Krebs at orgnet.com analyzed purchasing trends on Amazon. People who already supported Obama were the same people buying books which painted him in a positive light. People who already disliked Obama were the ones buying books painting him in a negative light. Just like with pundits, people weren’t buying books for the information, they were buying them for the confirmation. (https://youarenotsosmart.com/2010/06/23/confirmation-bias/)

One sees confirmation bias in our business all the time. Consider the case of Harry Dent, who is the author of numerous books, including the modestly-named titles, The Great Boom Ahead (1994) and The Great Depression Ahead (2009.) He has produced subsequent titles, along the lines of the latter. He recently admitted to mis-timing the market’s correction, which he claims is still coming, but in this business early looks a lot like wrong. Regardless, one wonders how much reading he did of things that were contrary to his beliefs over the last seven years.

Part of our company’s name comes from “Intellectual Integrity” (the rest coming from “diligence” and “strategy”), because of the importance we place on seeking out non-confirming information.

The opinions voiced in this material are for general information only and are not intended to provide specific advice or recommendations for any individual. No strategy assures success or protects against loss.